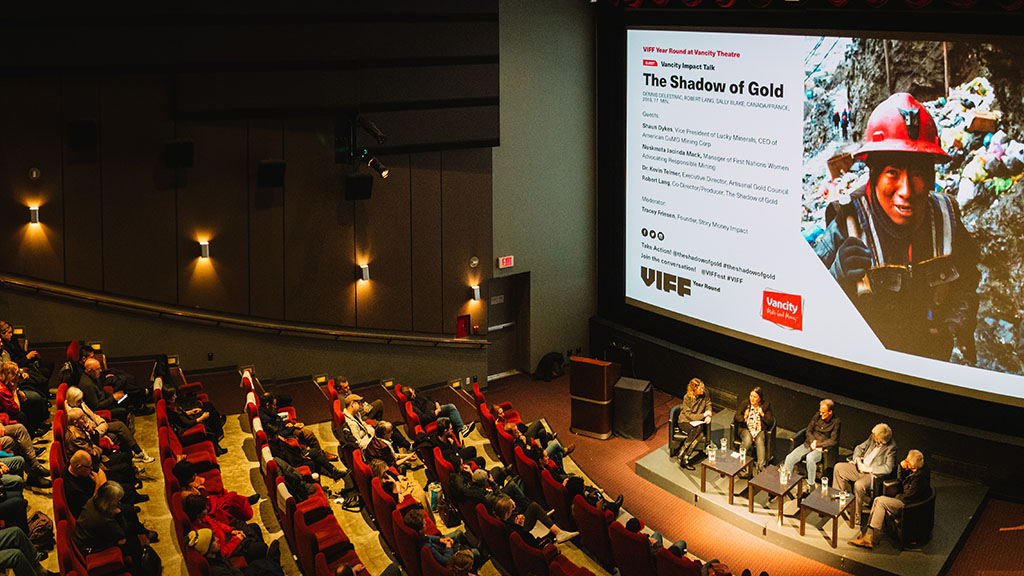 Throughout the past year, The Shadow of Gold has screened at many events around the world, like the Inhorgenta Jewellery Fair in Munich and the Colorado Environmental Film Festival

During 2020-2021, we arranged many screenings in mining-affected communities and with educators across Canada in collaboration with Mining Watch Canada. In response to Covid restrictions, several had to be presented through virtual screenings with post-screening discussions via Zoom.

Would you like to host a virtual or in-person screening of The Shadow of Gold? It’s easy and affordable. To find our more, visit our REQUEST A VIRTUAL SCREENING PAGE.

SOME Of OUR VIRTUAL SCREENINGS

This Free Screening and Panel Discussion for Earth Week featured The Shadow of Gold documentary film hosted in partnership with MiningWatch Canada, Green Teacher and Echo Foundation. For educators we previewed our 36-page film Educator’s Guide.

This screening and post-screening discussion inspired positive reactions and testimonials.

We’ve also had two successful recent screenings in Whitehorse, Yukon, and an international French language event with participants from Africa, Europe and Canada where we introduced our French educational materials including Guide and the feature French version.

July 7, 2020
Virtual screening for mining-affected communities in BC and the Yukon
(with post-screening discussion featured experts and activists from Western Canada)

Special event virtual screenings have been presented in collaboration with Mining Watch Canada with funding support from Patagonia, The McLean Foundation, and the Echo Foundation (for 2021 screenings).

THANK YOU TO OUR GROWING LIST OF COMMUNITY + EDUCATIONAL SCREENING HOSTS

The Shadow of Gold premiered in Toronto at the Hot Docs Ted Rogers Cinema and was followed by special theatrical screenings in major cities across the country. Each screening was followed by a moderated discussion featuring responsibly-sourced gold jewellers, non-profit leaders who work with mining communities, gold prospectors, artisanal gold innovators, First Nations advocates, and industry watchdogs.

The World Premiere and Canadian Theatrical Tour was supported by Mining Watch Canada, Human Rights Watch and Impact in addition to many local outreach partners.